Briney Rigby is a 16 year old Australian female who raced for Team Sweden (as there are no Australian teams competing) at the F1H20 World Championship series in the Formula 4 class which races for the Eurofin Cup.

In 2015 Briney raced across the country as well as two international meetings when she raced for Team Sweden. Briney is full of energy, healthy, fit, personable, mature, very determined young lady and a very proud Australian who is going after her dream and has the skills to back it up.

In 2014 Briney raced in 8 races for Team Sweden in China, Qatar, Abu Dhabi and Sharjah and won 3 races, finished 2nd in 3 races and 4th in 2 races and finished the season 2nd overall only 20 points behind against her more seasoned male competitors (who are older than her being aged between 18 and 42) despite not competing in the first round. The other teams took notice of this very determined, talented and mature young lady from Australia in her rookie season.

Formula 4 boats are classed as racing catamarans and are 3.9 metres in length, 2 metres wide, have a minimum weight including driver of 350kg and are powered by low emission 4 stroke Mercury outboard engines with speeds up to 120 kph. The boats have in built flotation, the drivers sit in an enclosed safety cockpit, are on oxygen as well as being strapped in by a 5 point harness as well as being on radio communications.

To quote multiple World Power Boat Champion Englishman Jonathan Jones from a 5 page article about Briney in the current issue of Club Marine magazine ‘’ Briney is doing a great job and has a strong future in powerboating in my opinion. She just gets on with it with no dramas. She is young, fit and has good upper body strength which is essential in the sport. It is nice to see the family is right behind her and together with her Aussie friends have given her this great opportunity. F4 is a solid training ground for F1 and we have seen several young drivers move into F1 in recent times who are now becoming extremely competitive. I have no doubt that given the opportunity she is a star of the future. ‘’

The same weekend that Australian Formula 1 driver Daniel Ricciardo was racing his F1 car in Abu Dhabi Briney was 20km away from him in Abu Dhabi as well standing on the top step of the podium with an Australian flag and the Australian anthem playing having just won both races.

Briney Wins Again And Reigns on F-4S in Abu Dhabi

Briney finished 2nd in Eurofin Cup series on 126 points despite not racing the first round with Mike Syzmura from Germany winning on 146 points and Khalid Al Kuwari from Qatar on 77 points edged  out Jan Andres Landsnes from Norway on 72 points in a tight race for 3rd.

Thank you to every single person that has helped Briney, we really appreciate all your efforts. 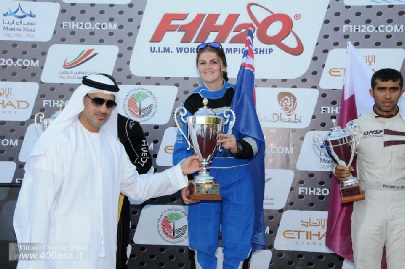 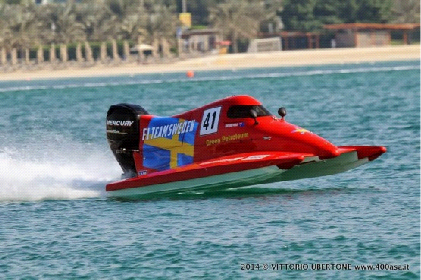 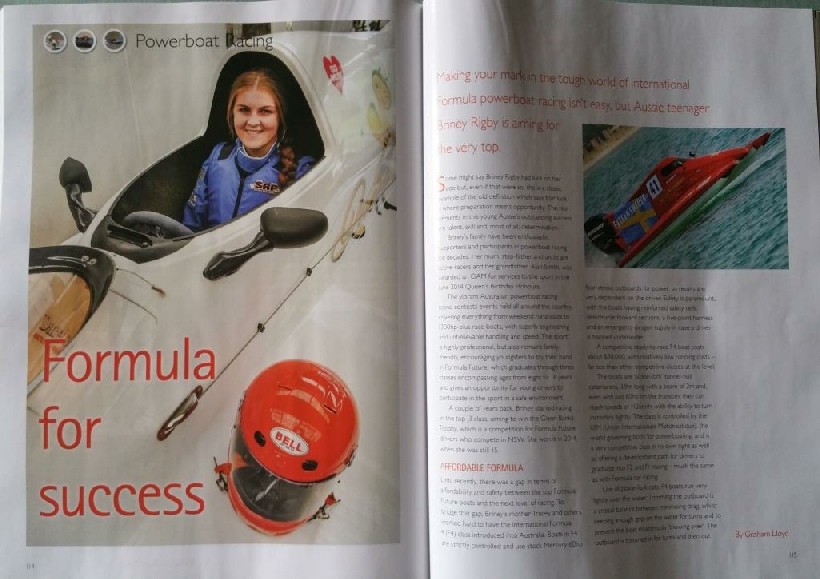 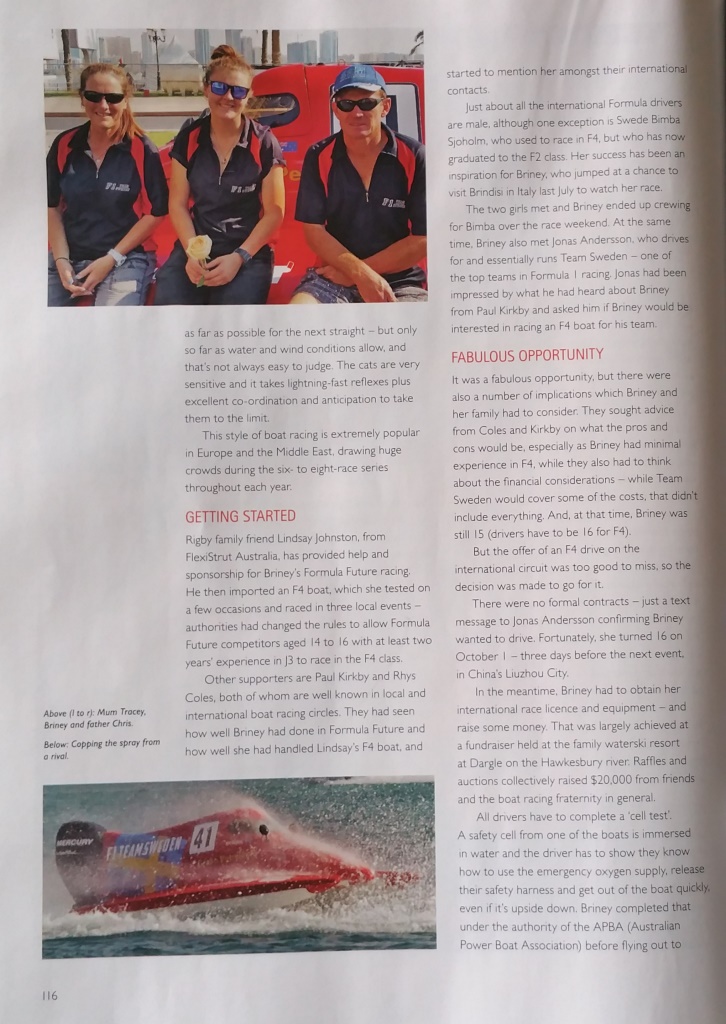 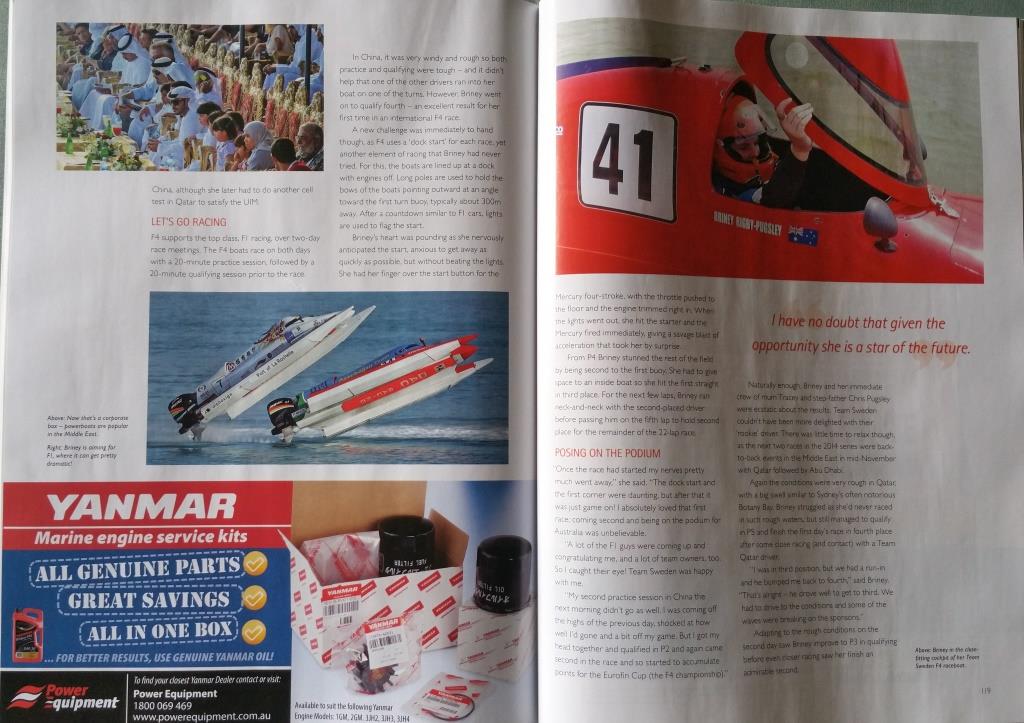 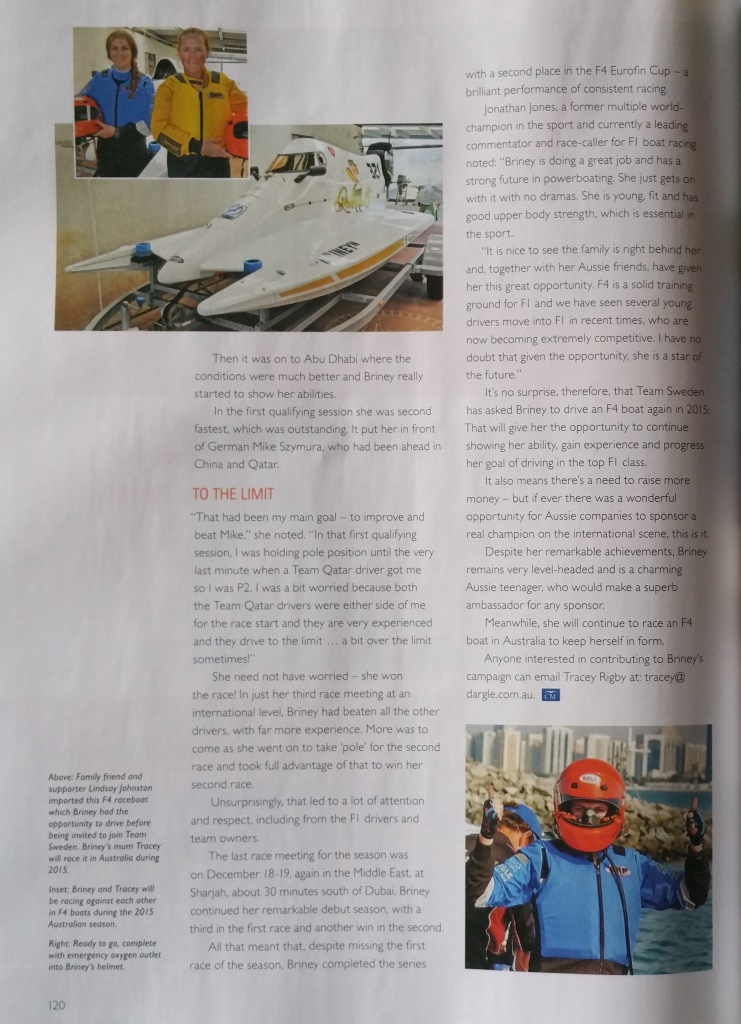 Excellently written article by Graham Lloyd in the February issue of

Available from all good marine shops. 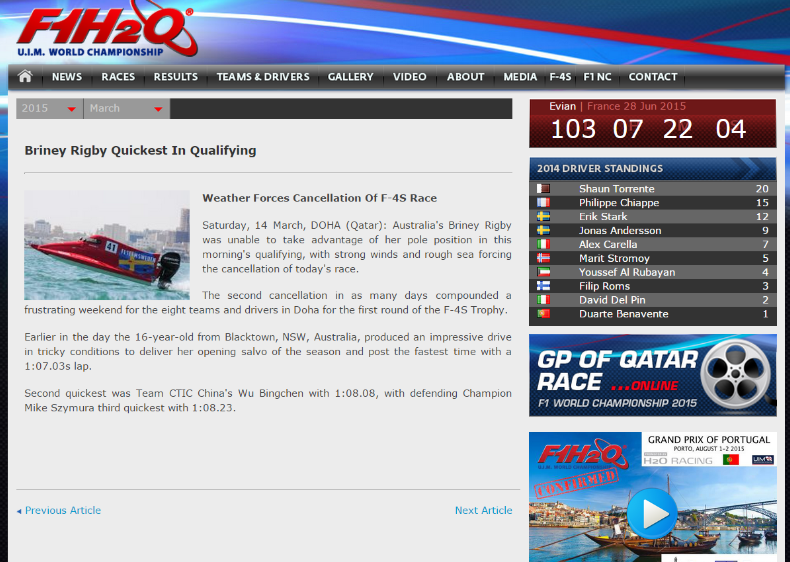 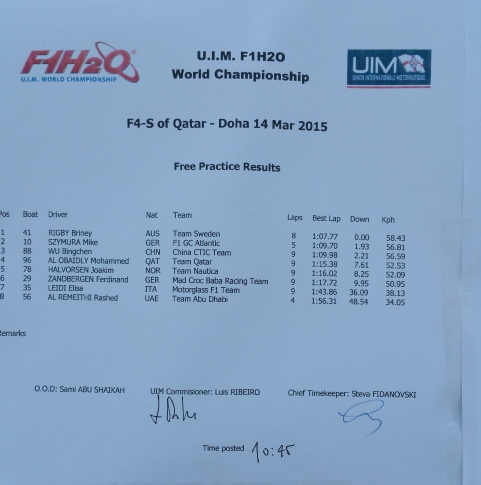 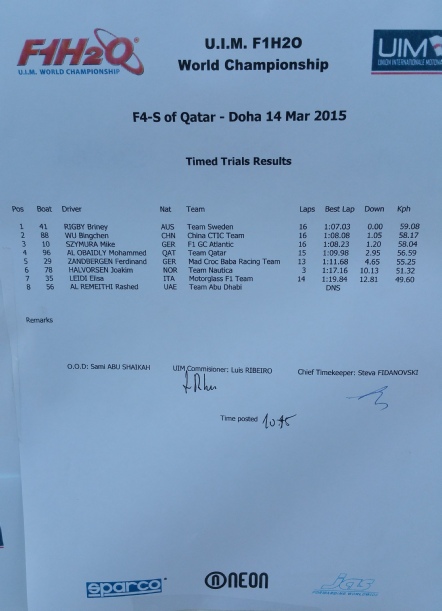 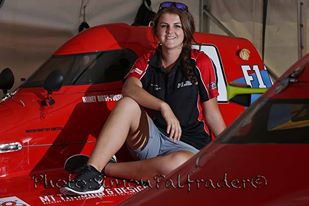 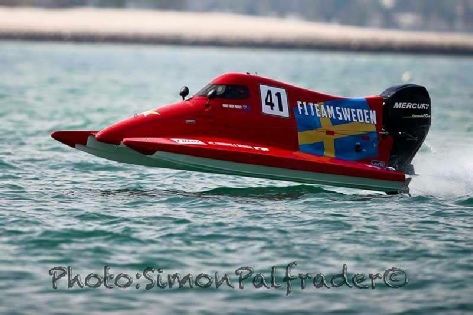 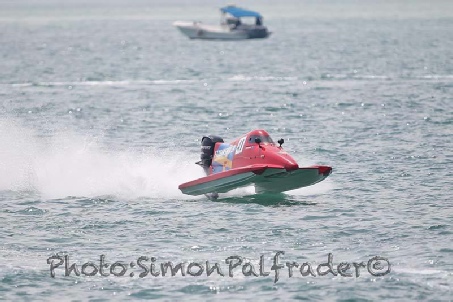 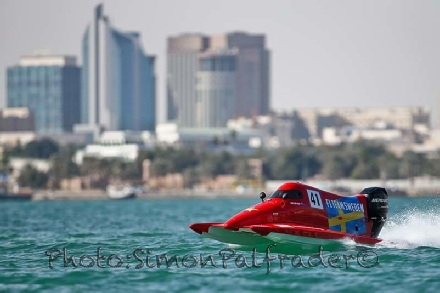 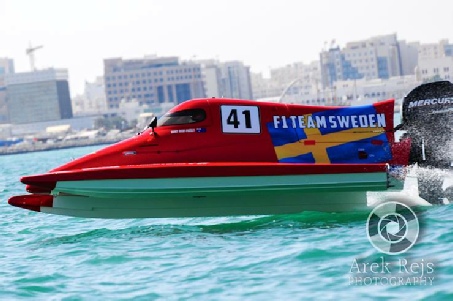 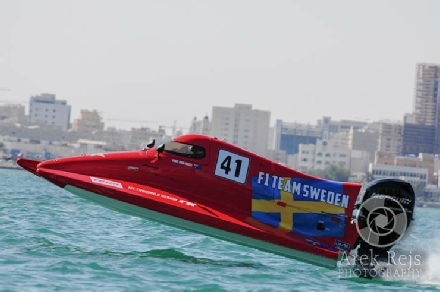 Qualified on pole, race cancelled due to water conditions.

Briney  stayed home and competed at the final round of the AFPGP series where won the F4 final round and won the inaugral F4 series instead of going to Portugal .

Briney celebrated her 17th Birthday in China racing. It was a week full of mixed emotions..disappointment, excitement, hope, doubt, failure, success, anger, anticipation, but that is all part of the journey..and what a journey it is. 3rd Place overall with a 2nd and 4th out of the 2 races- GP of China- Liuzhou.

Due to circumstances out of my control it is with great regret to announce, that Briney and the BRP Team will NO longer be racing for Team Sweden in the F1H20 Eurofin Cup.

We would like to thank Jonas Andersson and Team Sweden for the opportunity and the chance for myself to be able to live my dream and have the chance of representing my country and fly the flag for Australia.

We, would like to thank anyone and everyone who has followed me on my journey, and who have helped fund in anyway shape or form. It has been very much appreciated and will certainly be remembered. Thank you.

I would never have achieved or had the opportunity I have, without the help, guidance, support, mentoring and belief in myself and ability from my A Team of, Rhys Coles, Chris Pugsley, Paul Doggy Kirkby, Toddy Leary (Crew Chief), Simon Troy, Titty and all the love and support from my Grandparents, Granny and Poppy and my amazing mother who has supported me since day one with no doubts. Without the help, motivation, guidance I would never have dreamed of making it to where I am or succeed to where I have.

As they say, one door closes, two doors open. I am not giving up and we are still open to any opportunity to further my racing career.
Thank you,
Briney xoxo

Check out their FB pages for more great photos. 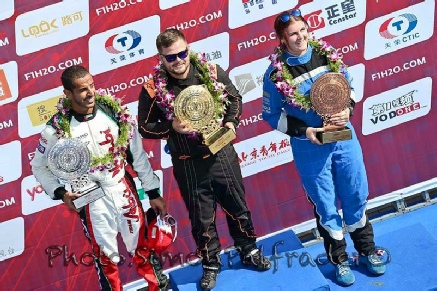 We appreciate the generous support of the Australian Power Boat Racing Community. 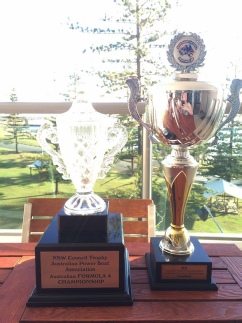 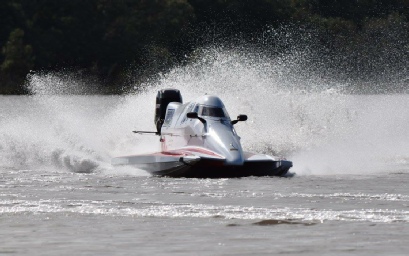